Great news and not so great news 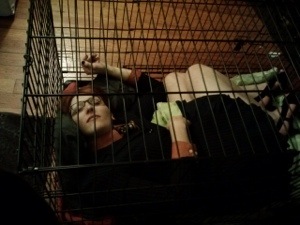 Hey there, I bet y’all have been wondering what the hell Abbey’s been doing for the past 2 months; or maybe you didn’t. That’s fine, I won’t take it personally. At least I’ll try not to. Okay I lied, I am going to cry myself to sleep when I find out you don’t care about me. Okay that was a lie too, but lets move on to what has been happening in my life! (And yes that is me in a cage)

The not so good news is that I have been in a state of emotion meltdown for the past 2 months and my life has been crumbling down around me. It was partially triggered by my girlfriend’s emotional crisis in which lead her to temporarily relocate to Florida in order to get away from all of the negativity in her current environment. For a time I hadn’t heard from her and I’ve been a blob of raw emotion oozing through the days like clockwork at the same slow pace. Many feelings of fear, panic, pain, sadness, uncertainty, abandonment, shame, guilt, anger, rage, psychosis, delusions, and anxiety. It has also brought up a lot of issues I need to work on within myself. It doesn’t paint a very pretty picture does it? It is probably a dark swirling canvas of black and sharp colors like crimson blood red, or a deep magenta. Maybe I will paint my emotions. That could totally be a coping skill!!!

Moving on, this all sort of culminated two weeks ago when I cut myself and went to the hospital. From there I was sent to the lowell treatment center and put on the young adults unit. I spend a week there on 15 minute checks, asking to go to the bathroom, no pencils, rubbery pens you have to sign out, no belts, laces, necklaces, jewelry, or drawstrings of any kind, and basically constant supervision. It was the real deal. They at least got me to a point where I was stable. One of the Nights there was a code blue and someone had to be restrained. They put him in the quiet room right next to my room and he was banging on my wall. I start having a panic attack and run to the other side of the unit with my ginger cat buildabear and cowered in a corner. One of the staff was checking on me the best she could. In the end I scratched up my arm with a folded up teddy grahams wrapper.

The night prior to my discharge an even bigger code blue or green happened and a kid had a knife and was gonna stab someone. The police were called and while they were restraining him with sedatives and force, I was helping keep the other rowdy patients calm. I went into fight mode where I wanted to do anything I could to help.

But, I am out now, and on to the good news! I am in New Jersey! (No that’s never good news) but what is right next to Jersey?? What’s that??? PA… Pennsylvania!!!! And who practices in new hope, PA? Dr. Christine McGinn!!!

Yay you figured it out 😀
Anyways if you don’t know who Dr. Christine McGinn is, she is a transgender surgeon who does srs, ffs, and other surgeries and is now one of the few surgeons here in the states who can perform these procedures!

So tomorrow at noon I have a consultation with the doctor (who?) to go over the various procedures I may get and possibly about insurance. My goal is to get insurance to cover some of the procedures I want like FFS and a boob job. But we will see once I get a request for pre-authorization in.

So anyways, wish me luck tomorrow and I hope you all have a wonderful day! I will post a more organized update later this week about my experience.

6 responses to “Great news and not so great news”